Women in Trucking: Meeting a Growing Demand for Truckers #1 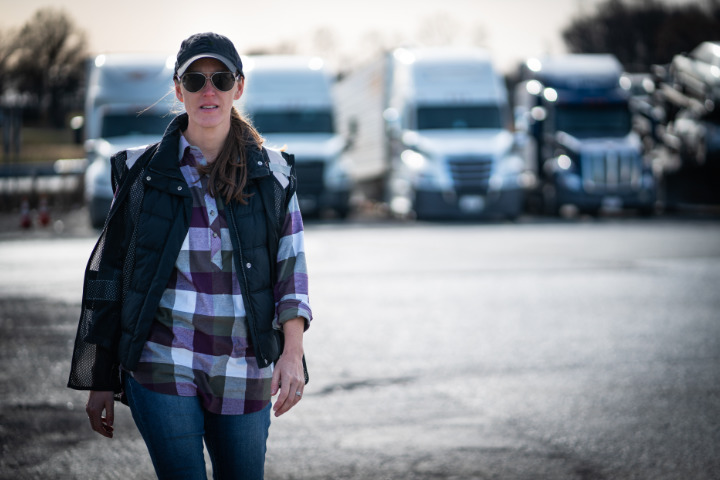 For a long time, women in trucking have only made up a small percentage of the 3.5 million truckers across America. The lifestyle has rough edges that have sometimes steered women away from it, but in a male-dominated industry, one new trend has become an increase in female truckers. In 2010, the industry only had 4.4 percent females; in 2014, they had 5.8 percent, and in 2018, they made up 6.6 percent of all truckers. This trend shows a rising number of female truck drivers.

1. Greater Opportunities for Women in Trucking

Because of a crushing shortage of 60,000 drivers, the rife opportunities in truck driving have made it increasingly appealing. Women have also begun to feel more welcome in this male-dominated industry. In the past, truck drivers had a stereotype of a macho industry. However, men and women receive equal pay in trucking, and extra steps and measures will ensure that they receive a warm welcome. In trucking, you receive compensation based on the mileage or get paid a percentage of the load.

Related story: Female Truckers Growing in Numbers in an Uncertain Economy Due to COVID-19

2. Women Critical to the Future of Trucking

Right now, the trucking industry faces a shortage of 60,000 drivers, but some analysts estimate that that figure could swell to 160,000 drivers by 2028. Failure to address the shortage could slow down industry growth and hurt many sectors. Part of the shortage could be caused by the old generation’s truckers retiring with fewer people coming in to replace them. The industry will have to hire 1.1 million truckers in the next ten years to curb the shortage.

The other thing increasing demand for truckers has been the skyrocketing growth of the industry. Trucking will need to hire new drivers to account for growth. Trucking was a $742.1 billion market in 2020, and that number could balloon to $934.2 billion by 2023. Women drivers can support growth while making massive profits. Truck drivers can earn over $100,000 per year, and the income will likely rise as the demand grows. Truckers fulfill an essential part of our everyday lives through stocking our store shelves, and they make an incredible sacrifice of time to do it.

4. Retiring and Traveling the Country

You see some women truckers who retired from their other profession and decided to do team driving with their spouse to see the nation’s landmarks. This provides a sense of security. Trucking has its dangers for women and feeling safe, which could be why trucking doesn’t appeal to every woman. Especially when stopping overnight at truck stops, which can be full of drugs, prostitutes, and other unsavory individuals, women worry about their safety. Having a partner along has made it easier for them to feel safe.

Women who have a shorter stature have occasionally complained about the controls and seats getting adjusted to a comfortable level. Especially when you will drive for hours every day for weeks at a time, you want to feel comfortable in the truck. Women also tend to be more family-oriented, and being away from family for days or even weeks at a time without socializing has proven difficult for some women. Everyone has struggled with this aspect of trucking. Unlike in many other fields, however, women in trucking receive the same amount of pay as their male counterparts.

In the coming years, women in trucking will play an ever-increasing role in this industry as trucking companies look for any way to address the growing driver shortage.

6. Vital to Solving the Shortage: Women in Trucking

Provided the trucking industry can solve some of the critical issues facing women truckers, they will have a new talent pool to pull from. This will come from adapting the marketing approach to bringing in more women, and they will want to do things to address the safety issues facing the industry. For example, making truck stops safer at night could become a key to resolving this issue. Some companies have more financial resources to build campaigns that will attract more female truck drivers.

Because human traffickers remain in a constant movement like truckers and stop at many of the same truck stops as them, truckers can call out this behavior whenever they see it. Calling in could save someone’s life because sex slaves only have an average lifespan of seven years. It’s not that male truckers can’t assist with work like this, but many females feel even more passionate about it.

8. How Much Do Female Truckers Make?

To paint a picture of females’ opportunity in trucking, they earn an average of $53,000 per year. The pay increased $7,000 in the last five years. That should demonstrate the current pay level and where it might be headed with the current shortage. This industry will grow increasingly attractive as the pay continues to rise.

Trucking has one other key advantage that many other industries don’t have: a lower education barrier. With many of the other jobs that you’d want to have, you’d have to enroll in college for four years before you could get a job. Even then, you have no guarantee of a job because of the high demand. Trucking school only takes an average of three to four weeks to get your CDL license. After that, you can start earning money from your new career.

You have two other key advantages that you don’t get with other jobs. First, trucking schools can be paid for by the trucking company. They will pay for your education so that you can drive for them. Otherwise, it still only costs between $3,000 to $7,000. Don’t go to a school that charges more than that. The other advantage is that trucking has so much demand that you can get started almost right away. Even if you paid for your schooling, truck driving has such a demand for drivers that you can typically get a job within a few weeks.

For years, truckers have had an image where they act stupid and are hairy macho men. The media has contributed to this negative image, which may have made it unattractive as a job prospect to some females. Getting more females into the industry could come from rebranding the image of what people think of as truckers. One of the things that you learn about trucking when you look deeper into it is that you have people from all walks of life.

In the coming years, women in trucking will play a more significant role in trucking as they help address the growing driver shortage. We have already seen trends in the direction of more women in trucking. Even today, it remains a male-dominated industry, but we could see that number balancing out with time. One thing about being a female in trucking, you receive the same pay as men do.