Trucking: A $700 Billion Industry and the Mind-Blowing Facts 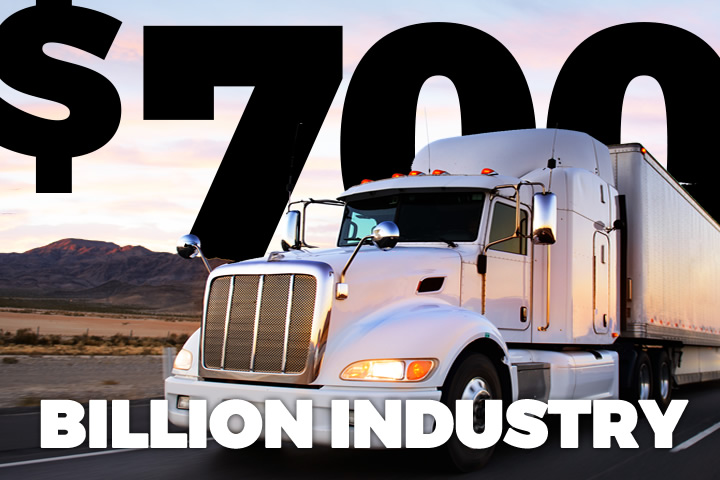 The United States largely depends on truckers to get freight from one location to the next. Many of these truckers work in what is known as over-the-road trucking jobs, which means that they can spend weeks or even months at a time on the highway.

Millions of truckers are employed on the road, and the logistics sector has grown into a $700 billion industry. You have a lot of money moving around in this business. Let’s have a look at some of the most mindblowing facts about trucking.

As a sector worth $700 billion, the logistics industry has even posted a higher GDP than 150 countries and their posted revenue from 2017. Granted, this marked one of the most prosperous years in recent US history, but looking at how much abundance exists in this industry, it becomes evident why getting a CDL makes sense. If you were to rank this industry in the US as a nation, their GDP would rank in 33rd place.

None of the Regulators were Ever a Trucker

Although you have people regulating the trucking sector, none of the people who make the laws and regulations for this industry ever worked as a truck driver. The Federal Motor Carrier Safety Administration oversees this industry, but no one who has ever worked in this regulatory body has ever been a trucker. None of them have ever held a CDL, and they have no background in the trucking business.

Getting Your Food at the Grocery Store

Nowadays, most people get their groceries from a grocery store, rather than a garden, but if truckers were to stop making deliveries to the stores, within three days, most grocery stores would be empty of food. Longhaul truckers help to replenish the grocery stores.

With most truckers, they will log anywhere from 2,000 to 3,000 miles every week. That adds up to a massive amount on an annual basis. At the end of a year, most dedicated truckers have driven 100,000 miles, and with that as the average, you will have driven 1,000,000 miles at the end of 10 years. To put this into perspective, your average driver on the road only drives an estimate 13,500 miles each year. When you add up the miles of 100,000 per year, it means that most truckers will be on the 240 days out of the 365 days total. That’s a long time to help with meeting America’s freight demands. However, a person doesn’t necessarily have to do an over-the-road trucking job. You can choose to drive locally so that you will even get home every night to see your family, but others like to travel and see the country. It depends on the trucking job that you have chosen.

Trucking has always been a male-dominated industry, but you have a history of trucking that goes as far back as 1929 when the first female, Lillie McGee Drennan became the first female trucker on a commercial scale. Incidentally, she also carried a gun with her at all times. Females only make up six percent of the trucking industry. This is mostly male-dominated industry.

Hidden Meaning to the Word 18 Wheels

Most truckers know how their truck has 18 wheels, but not all of them understand that 18 has another meaning in the Jewish tradition. The Jews consider 18 an expression of blessing, so the next time you think of your 18-wheel truck, think of it as a blessing.

Remember when we spoke about that fact where the logistics industry is a $700 billion industry? Well, the top five biggest trucking companies brought in a total of $64.9 billion of that total. You have five different companies that are responsible for this massive growth that includes:

Not to mention, you have thousands of trucking companies, and these are only the biggest ones in the business.

20 States List Trucking as the Most Common Job Title

To understand how prevalent the trucking industry is in our daily lives, you should have a look at the different states. Out of the 50 states, 20 of them rank trucking as the most common job title. That goes to show how much influence this sector has had on all the others. In total, analysts estimate that 3.5 million truckers across the United States have helped to keep freight in a constant state of flux.

Massive Trucking Accident: What are the Most Common Mistakes?

When it comes to an accident with a big truck, the four biggest culprits that have led to accidents include:

Another common thing that has led to trucking accidents is when another car fails to stay in their lane, and the trucker collides with them. The idea that you have to understand about 18 wheelers is that they don’t have the same responsive with the brakes. It doesn’t stop as quickly because you potentially have a truck that weighs 40 tons. Meanwhile, the average car will only weigh 2 tons. With the significant contrast in weight, it’s no wonder that semi-trucks have a much harder time stopping. They need 40 percent more time to stop than what a car needs.

Because they’re such monsters in size, most people don’t think of semi-trucks as a green vehicle. However, today’s semi-truck has been dramatically improved since its early days. You have clean diesel operating engines today, and a truck from 1988 has the same emissions rate as what 60 trucks from today have in terms of emissions. That goes to show the drastic difference between the two trucks. To put that into perspective, that’s an entire parking lot full of semi-trucks, and they take up a lot more space than what cars do.

You may have never thought of it in this context, but a truck driver helps to create other jobs in different sectors. One out of every 14 jobs within the United States gets impacted by truckers in some way. For example, someone who works at a grocery store—going back to the example of groceries—sells goods in the store that could only be possible from semi trucks. The entire modern world has been constructed from these semi trucks.

What Do Semi Trucks Haul?

If you want to have a look at small businesses, you should look no further than the trucking industry where 90 percent of the trucking companies have ten trucks or less. Still, a person who gets involved in this business will earn plenty of cash even with as small of a business as that because you can make up to 10 times what you pay the drivers off each freight delivery.

If you were a trucking company, how do you compete with more prominent carriers like Swift Transportation? You offer truckers greater flexibility because this is something many of the bigger carriers can’t provide.

Trucking has exploded into a $700 billion industry, and you have a highly fascinating industry that you would be working in if you were to choose this business. Because there’s a lot of money in this industry, you can walk away with plenty of cash. Truck driving is one of the best-paid professions around, and the average truck driver makes $37,930.