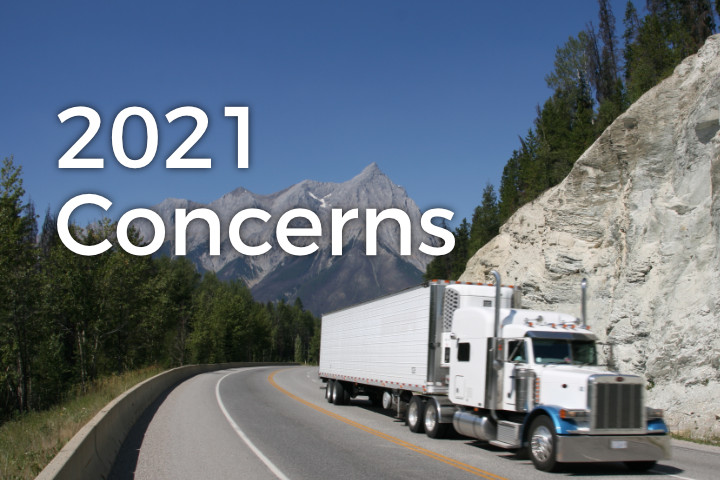 Many challenges have popped up in 2021 for the trucking industry. The top truck driver concerns in 2021 are a multitude of issues like vaccine distribution and growing demand for goods over the internet. COVID-19 first took severe effect in the United States in March 2020. During the pandemic, truckers helped us navigate a shortage of supplies and pharmaceutical medicines. If you remember, at its worst, we had no toilet paper on the shelves and a shortage of goods like meats. What concerns do we face in 2021?

In 2021, the economy has an expected GDP growth of only 4.2 percent. Expert analysts believe that the unemployment rate won’t drop below four percent until 2023. Most hope that once the pandemic gets put under our heels, the economy will return to its pre-pandemic size. The demand for goods remains high despite the pandemic as people have switched to buying goods and services online. Some believe that 2021 shows more promise than 2020. When the pandemic first kicked off, we had a lot of hysteria, which hurt the economy in many sectors. Over 97,966 businesses shut down in 2020, and within the first six months of 2020, 640 trucking companies shut down.

The only downside comes from how returning to normal won’t feel like the old normal of before. We still have to face this pandemic with brave faces even after the truckers distribute the vaccine across the nation. Distribution of the vaccine means that industries hurting because of COVID-19, such as manufacturing and services, can return to normal. This will lead to an increase in freight orders for truckers.

Turning a profit in 2021 could prove more difficult because of the rising cost of insurance and driver’s wages. In 2018, the cost of trucking insurance rose 12 percent. Unfortunately, trucker’s insurance rates have trended upward continually over the last several years, and we don’t see an end in sight. While the pandemic hasn’t directly impacted the cost of insurance, fatalities, and crashes, it has increased over the last few months, which has raised the rates. Even with fewer vehicles on the road, the increase in truck accidents has led to higher rates.

What drives the higher rates most in 2021? The chief reason behind it comes from insurance availability. Insurance companies that would put up between $5 million and $10 million in layers now have to look at between $2 million and $5 million layers. This has raised the rate of insurance. The other thing that has led to insurance companies raising the rates has come from the truck driver shortage. The trucking industry has an estimated shortage of 80,000 drivers. Because of this shortage, they have had to hire less qualified drivers, leading to more trucking accidents.

Along with the cost of insurance, the trucker shortage has meant a rise in income for truckers. That spells good news for truck drivers concerns in 2021, but it poses a problem to companies as they must search for new ways to turn a profit. From 2012 to 2017, truck drivers saw their salary increase 33.6 percent. Most truckers average 56 cents per mile.

Use of Manual Processes

In the age of technology, we have increasingly used it to automate our process. Many trucking companies continue to use manual methods because they have been slower to adopt the technology. Trucking companies willing to adopt new technology in 2021 will increase advantage over the companies that continue with manual processes.

What examples of automation can trucking companies use? Some of the examples that you can use it for include:

Technology is our future. The companies that don’t take full advantage of it will get left in the dust as other companies use it to enhance productivity, efficiency and eliminate busywork. Having a document management system hands you another technique that you can use to streamline and automate your processes.

The Biden administration has to deal with the fallout effects from the Trump era’s trade war with China. During that time, President Trump imposed $300 billion in tariffs on imported goods from China. How does that impact the trucking industry? When President Trump imposed tariffs on imports, it drastically dropped the ocean shipping trade. This lowered the demand for truckers at ports for shipping across the nation.

Still, this may not have as drastic of an impact as we might think. Granted, China’s trade goods have dropped sharply, but this could lead to an increase in activity on the East Coast. While West Coast demand nosedives, East Coast demand could see a skyrocketing increase. To sum it up, the call for trade goods doesn’t go away. It uses other sources to satisfy it. Ports like Savannah, New Jersey, could see an increase in shipping goods as it comes from new places.

With the increased cost of trade goods, they may raise the prices on trucking companies, which will take a bite out of their profits. Biden says that he has no plans to lift the tariffs immediately. He says that this will maximize leverage for the United States in negotiations with China for the future.

In 2021, the trucker shortage was at 80,000. Economic analysts expect that number to increase as projections predict a 160,000 driver shortage in 2028. In 2023, they believe it will hit a need for 100,000 truckers. The increased pay has done little to put a dent in the ever-widening chasm as the industry continues to need qualified drivers. We need to address the issues where truckers don’t feel valued and experience poor work conditions.

The millennial generation expresses less interest in trucking than previous generations. Some millennials see the profession as dangerous, and safety does remain a top concern for the industry. Trucking fatalities reached 4,678 drivers in 2018. That broke a record as the highest fatality rate for truckers in 30 years.

Millennials have less interest in trucking because they believe autonomous driving will wipe out the profession. It won’t. Trucking remains one of the most secure jobs in the nation as you act as the beating heart of the United States economy. Accidents with semi-trucks often prove fatal. Think of it like you would a commercial airliner. Sure, the plane can now fly by itself, but who feels comfortable in an aircraft without a pilot? Likewise, you don’t want thousands of 34,000-pound trucks without drivers. Truckers won’t lose their jobs at the rise of autonomous driving. Their role on the highways may shift to more of a guide than a driver, but they will never drop off the map.

Truck drivers who lacked access to parking has ranked as one of the top truck driver concerns in 2021. Trucking companies have had to bear the costs. You have many full truck stops, which has led to a safety problem as truckers have had to stop at the less-than-safe truck stops. This problem became especially pronounced during the pandemic.

Trucking ranks as the eighth most dangerous job in the United States. CSA has bounced around as one of the top trucking issues since 2010. To give you an idea, it usually ranks in the top five. The FMCSA has proposed several fixes over the years, but it has done little to curb the problem. The six most common CSA violations for truckers include:

Each CSA violation adds between one to 10 points to your record based on the severity, which raises your insurance rates. To make matters worse, you don’t have a minimum for when the FMSCA takes action against you. You could find yourself with an out-of-service operation order, which means you have to cease all driving.

These are the top truck driver concerns in 2021 that both truckers and trucking companies have to deal with daily. The biggest one that we face is the growing trucker shortage. As older truckers continue to retire or quit the profession, we have an increasing need to raise rates for trucking companies until they can no longer sustain it. This will lead to an increase in prices for consumers. Addressing these concerns becomes paramount if we want to make the industry better as a whole. We want to improve the situation for trucking companies and drivers.

BetterTruckDrivingJobs.com hopes that this article addresses the Top Truck Driver Concerns in 2021 in great detail. Feel free to add your thoughts by leaving us a comment below.