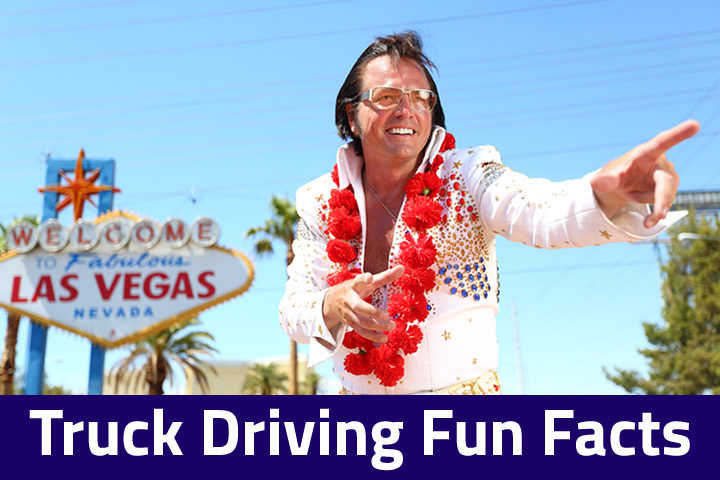 America depends on millions of truck drivers to deliver and transport goods every day. Here are 33 truck driving fun facts. There are many amazing facts about the men and women drivers that transport goods across America. There are also incredible feats that have been accomplished centered around big rig trucks that are at the core of the trucking industry.

How many stacked trucks does it take to reach the moon? What is the longest road train in the world? Do you know about the 3,974 horsepower Peterbilt? It sold recently, do you know for how much? How many billions of gallons of diesel fuel are used for freight each year? What is the fast truck in the world? How fast does it travel? We want to share some of these facts and fascinating stories with you.

Did you enjoy the 33 Truck Driving Fun Facts countdown? Surprising facts from Elvis Presley to Luella Bates America’s first female professional driver. National Driving Icon, Ralph Lendi, who has driven 7 million miles with amazing grace because all of those miles were accident and citation free. Ralph’s fantastic record is in the grasp of professional truck drivers all over America. Can you imagine pulling a semi-truck with your ear? Or how about pulling six 10-ton semi-trucks? That is raw human power at work.

All of these stories and amazing facts that center around the trucking industry show a small indication of how vital the trucks and the people who drive them are to society. America appreciates over one million men and women professional drivers. We understand the long hours you put in to keep America moving and going strong can be frustrating and tiring at times. We want to say, “thank you.”

Thank you for letting us share these fun facts and stories with you. Remember to keep trucking the beautiful country of America. As you enjoy the scenery from America’s roadways, please remember to drive safe and leave plenty of stopping distance.

BetterTruckDrivingJobs.com hopes that this article addresses the 33 Truck Driving Fun Facts in great detail. Feel free to add your thoughts by leaving us a comment below.